About two hours after we left ‘Weddings R’ Us,’ we arrived in Cleveland.  We drove through some pretty terrible areas….and then through more terrible areas.  Cleveland was pretty rough looking, nothing at all like Columbus.  It was like a larger Buffalo, but lacking that remaining charm and visible signs of progress.  I wasn’t going to base my assumption upon first glance though, I was going to see how the rest of our visit played out.  The first place we wanted to stop was “The Great Lakes Brewery.”
Located at 2516 Market Ave, the brewery rests on the corner of a pleasant little block; a breath of fresh air from what we drove through.  The brewery was dealing with a nice lunch crowd with what appeared to be, a full out door eating area.  It was so nice outside, that it was tempting to eat out there but we had never seen the place before, so inside was where we were going to eat.  We got a table immediately, both frothing at the mouth for our first real escape from our diets.  I ordered a Reuben with fries accompanied by their own “Commodore Perry IPA“.  Nicole ordered the “Local and Fresh Plate” along with what I think was a Belgian White.  One thing I do remember clearly, is that Nicole’s dish was unreal.  It was so good.  She loved it so much.  She was so happy. 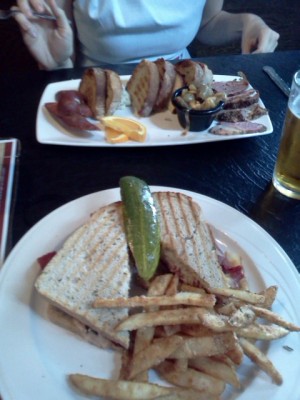 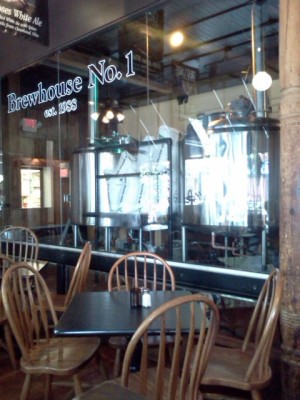 An older gentlemen approached our table and took the picture above for us.  He was there with his family celebrating the 50th anniversary of him and his wife.  He seemed sort of moved when he found out that we had gotten married 2 hours earlier.  He was a nice guy.  The first experience in Cleveland ended up being really awesome and lunch was great.  Totally stuffed from beer and food, we walked back to the car and started our short trip to the Inn we were staying at…
Share Tweet Google+ Pin it
Previous
Next