My internet has finally been hooked up, it was out for a few days.  My office has now been moved to the new house and I love it, its so much bigger than my old office.  Clearly it is not cosmetically appealing right now, in fact, I have a hard time believing this was cosmetically appealing ever.  I’m going to have to take off the paneling eventually and the atrocious wallpaper which is sure to be awful.  Everything else in the office is nice.  It has a huge window which I’ll need to sand and paint.  The light in the center is o.k. for now, although most likely I will be putting in a ceiling fan.  We have decided that eventually the entire painted hardwood floor will be bamboo so the floor right now isn’t an issue.

The kitchen is now 99% gutted out, with only a small section of the ceiling remaining to pull down.  Al measured the floor and is preparing to lay the leveler down along with the bamboo flooring.  We also still have half a wall to knock out. 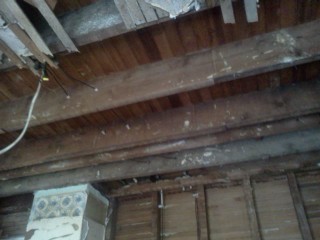 Today we are going to head over to Home Depot to get some yard things for some landscaping that we want to accomplish this weekend.  More to come!