Cool Addition to Our Daughter’s Room

As a kid I always had a wild imagination.  Whether it was playing with my action figures while involving them in a continuing storyline or acting in imaginary movies, both activities I would do by myself in my room.  If someone where to have filmed me, I’m sure it would have been embarrassingly hilarious.  As ridiculous as it was, I feel today that it was healthy and helped me grow to be creative as an adult.  We had video games growing up, I had my Nintendo/Sega.  I didn’t really give a shit about any of them.

I wanted Amelia to have a room that would hopefully spark her imagination.  I wanted a room that she would want to play in.  Nicole and I started brainstorming this room even before she was born.  This newest addition was something she had come up with that really put the final touch on her bedroom.

A freakin’ Tee Pee with a little fake animal skinned rug!  We got this on amazon for $130.00, I was able to use my amazon points and got it half off.  They have it in 2 sizes, we opted for the 6 ft size which was the smaller.  It fit perfectly. 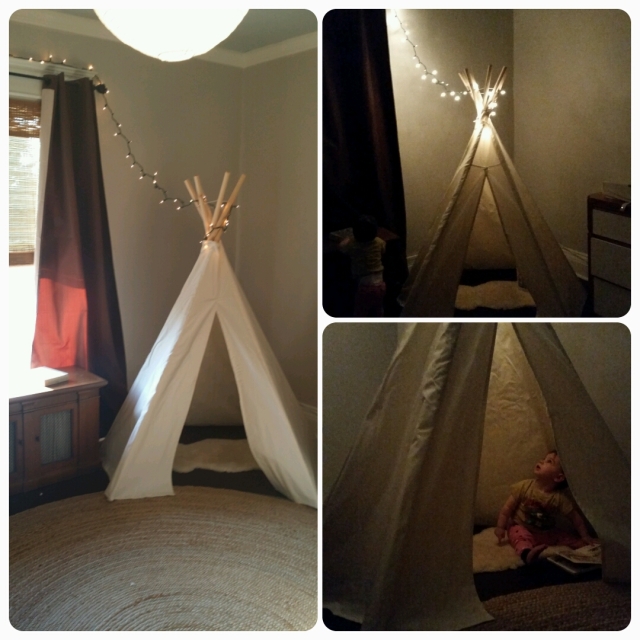 Her face is always priceless when I show her something new.  This was no different, and for a little while she wouldn’t go in it.  She just looked at it.  Eventually I convinced her to go in by going in it myself with her favorite book, “Harry the Dirty Dog.”  She followed me in and seemed to like it.

The quality of this thing is really nice.  The reviews on Amazon from everybody had said it was nice quality, but that it had a gross fishy smell.  It actually didn’t at all.  Maybe they fixed the issue.  I’ll have more pictures of her room once we finish the clouds that we want to paint on the wall.